I left that title open-ended so you could fill in the blank ala Anthony Jeselnik's "Search & Destroy" sketch. It's a hilariously funny comedy bit in absolutely horrendous taste. If you don't watch the show...hmmm...you should. It's mediocrely funny in the way that Tosh.0 has suddenly become UN-funny.

But the title also refers to my previous day's post "beautiful people are better than you." 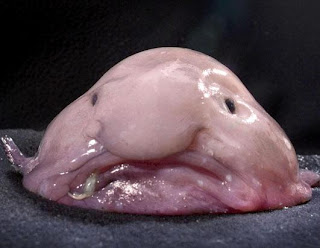 So let's talk ugly - and not just people. Did you hear? The ugliest animal on earth award goes to the Blobfish. It was announced by the Ugly Animal Society on national news outlets over the weekend.

Now, THAT, is amazing publicity. Who knew an Ugly Animal Society even existed.

To quote CNN: "goofy humans that we are, we tend to equate (what we consider) beauty with importance in the ecological scheme of things.

In fact, nature's many repugnant, repulsive -- or just very small -- denizens can be just as important for the environment's health."

You gotta love this British group, I mean, who couldn't love a bunch of kids dedicated "to raising the profile of some of Mother Nature's more aesthetically challenged children." Someone has to be their champion, right? Check out this interview.

But there is other kinds of ugly in the world.

Here's a list of the Top 5 Things I Find Ugly:

5.) Toyota Prius
4.) Lady Gaga-inspired platform heels
3.) Kelly Cotrone. Coutrone. Cutrone. I don't even give a fuck how you spell it - that's how ugly this thing is - it's not worth looking up.
2.) Bad Behavior (see also: Tiger Woods, Bill Clinton, Anthony Weiner, that trashy girl from MTV's "16 and Pregnant" who made a sex tape video, etc.)
1.) Animal Cruelty

Ok, let's talk about the Toyota Prius. Now, interestingly enough, I represented this ugly little hybrid in 2006 as the PR manager for the "Red Carpet, Green Cars" campaign in which we chauffeured top celebrities to and from awards shows in order to garner more press coverage than any other year that this campaign ran. The celebrities' preference for arriving by hybrid was supposed to underscore their commitment to an eco lifestyle. Great on gas mileage it might be, but it's still an ugly little car - and an expensive one at that.

Shoes. What happened to sensible style? I'll tell you - it went out the window the same day the pop-rock music world let Lady Gaga slither through it. Now, I have no problem with Lady Gaga herself. Go on with your bad self, girl. Just STOP wearing ugly shoes - PLEASE. Because I am not terribly fashionable, I stick to a classic look: tailored jeans and pants with silk blouses and 4" pumps with modest pointed toes. I am a huge fan of Dolce&Gabbana, ALDO, Guess, Carlos Santana, Jessica Simpson, BCBG, and a couple others. I have closets full of 4" pointed toe pumps in leather, snakeskin, print fabric, metallic, you-name-it. And it's a good thing I stock pile them because ever since Gaga arrived, I've been hard-pressed to find anything without a 2" platform, rounded toe and thick heel. UGLY. Thankfully there are signs that Gagga's novelty is finally fading out...I see the shelves have started to stock the good stuff again. In fact I just bought a new pair of pumps at ALDO the other day. The Kaziks are pretty dope.

Kelly Coutrone - self proclaimed "goth" and fashion PR maven...and by all accounts an ugly person. And I'm not talking about her unmade ashen face, or her drab black clothing; I'm talking about her ugly personality that darkens the very doorways she sulks through on America's Next Top Model. I can appreciate no-nonsense criticism as much as the next person, and granted, her job is not to coddle these naive modeling nymphs, but Jesus H. Christ on a popsicle stick, stop being such a bully. In the first episode of ANTM 2.0 "Guys vs. Girls"one of the top model hopefuls makes a very innocent comment to Kelly asking her if she was really as mean as she looks on the show and Kelly loses her mind and condemns her for being a very rude girl and continues to belittle her and correct her in her snottiest voice. I just can't believe she's a professional PR person. Neither can Wet Paint or thousands of facebookers who love to hate her.

Animal Cruelty. Have you seen the latest scandal to make it's way around the social mediasphere? Wal*Mart (and other retailers) just pulled a toy dead dog/roadkill (that I'm assuming it was carrying as part of their Halloween props and decor merchandise). The "toy" featured what looked like a skinned and bloody dog tethered by a chain and with a tire track running through the middle of it. I love scary gory movies. I love Halloween. I love haunted houses and costumes. I do not love animal cruelty or anything that hints at it. What was Wal*Mart thinking? What was the sculptor thinking who molded this awful prop? This thing was ugly all the way around. The most beautiful part was the product being taken out of production altogether.

So go out there marketers, branders, PR pros and make ugly things beautiful in the way only you can do.

In case you didn't do it yet...if you type "ugly people should" into your google search browser, your top 3 returns are: