Is nobody talking about the new milk radio spots???

Have you heard the new radio spots for the got milk campaign?

OMG. They blew me away. They're a brilliant extension of the long running "Got Milk?" campaign created by Goodby Silverstein & Partners. These advertisers have really done a great job keeping the campaign simple and smart at the same time.

I conducted several internet searches to see if I could find you an audio clip but haven't been successful - and thus I can't tell you what they say verbatim - but there are at least two of them and they go a little something like this:

Radio Spot 1 (in a breathy kind of woman's voice, almost like your subconscious talking to you):
Do you have milk in the fridge? Are you suuuure? You had milk last night with dinner, did you drink all the milk? Did your son have enough milk for his breakfast? Maybe you should stop at the store and pick up some milk.... 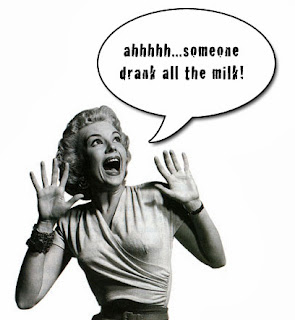 Radio Spot 2 (a very manly man's voice, handsome sounding):
Is there milk in the fridge? Or should you stop on your way home from work and pick up some more milk? There was milk in the fridge last night, but maybe your wife drank it. Ha, she would do something like that, just because she knows how much you like your milk and how that would really piss you off....

Like I said, I don't know verbatim what they said, but they are both very creative and very creepy :30 spots without any other sound effects or music. For :30 seconds it's just you, the voice, and the rush of traffic (if you're driving, as I was) and a growing anxiety within you that you may be out of milk and you should probably stop at the store and pick up another quart just in case. Very effective.

Now, you might be saying to yourself, "yeah, I get the 5:15PM spot, but what gives with the 10AM spot?" Aha! If you're a stay-at-home mom, chances are you're doing your meal planning on a Sunday night, and doing your hopping mid morning. So let's say you're headed to the store around 10 am and the radio spot comes on - bam - they've got you. You've already left your house, there's no going back, now you gotta get milk while you're out. And maybe you don't hear it yourself, but your husband does, because he's driving downtown for a meeting at about that time. You betcha that stay-at-home mom is getting a text on her phone at about the same time from hubby saying "hey babe, can you pick up some milk, I think we're out...of and how about brownies for dessert?" (ok, well, that's what MY husband would text me anyway. He's a huge chocolate fan.)

So anyways, not a big post. No revolutionary insights here - just wanted you to listen for this rad new milk campaign. Leave a comment if you have more information or links about it.

And if you're reading this on your smart phone away from home, you might want to pick up some milk on your way back. I think the ounce or two of milk stagnating in your jug is sour...in fact, you know it is...that's why it's been sitting there for a week...why you've taken the milk out and sniffed it twice but put the milk back into the fridge. Don't brownies sound good right now too? Pick up some milk and some brownies from the bakery. Mmmmm, ice cold milk.

ADDENDUM: Shortly after posting this I realized the radio spots are part of the "dream" campaign. I guess I had forgot that part of the dialogue. Indeed, I now recall the woman's voice saying "are you dreaming?" Read more about it by clicking here.
Posted by Unknown at 12:35 PM